It's been a long time from my last post but here I am again, and with very good news :)

The game is finally complete and is now in Beta stage!
It's been a lot of work, but hey! I have finished my first game! This is something I wanted to do from my childhood, and now I got it :).

The Beta version can be downloaded from the project page at Google Code.
At the time of this writing only Window installer is available. Linux .deb package will be available soon. The game is completely free (GPL3), so Linux users can download the source code and compile it.

A Google Group has been created for the project where you can ask for support or post comments about the game.


I want to thank Saul Cross for arranging the original game music. He has done an impressive work, this game would not be the same without him.
You can see Saul's work here.

In the following weeks I will be posting my impressions on the development, just in case someone out there finds it useful when trying to make his own one.

Some screenshots from the game:

If you like the screenshots you may want to see gameplay videos for all levels here.

And that's all, enjoy playing it!

Finally! The first Friking Shark level is playable.
There are some missing details and a lot of aspects to improve, but the hardest work (most of it modeling and texturing) is already done.
I want to thank Diego Sánchez for his invaluable support, in a direct way by modeling the coolest Level Boss ever :) and in an indirect way by pushing me to try some techniques new to me (like occlusion and normal maps).
I'll try to have a Windows demo release and upload the project to Google Code by the end of the week. The Linux release will surely take some time (due to my ignorance in deploying Linux software).
Posted by Javier Martin at 1:06 AM 2 comments:

My first models and textures

This may sound a little absurd, but, as a pure programmer, I have a real panic to graphics because I know modelling requires a talent I think I do not really have.

Anyway, there is no other option, I have to finish the game, so, this weekend I started to create the models needed to complete the first level using Blender and Gimp.

The first model I tried to create was the game tank. After a very frustating first attempt, I throwed it out  and restarted from scratch.


This is my current tank, surely not the best tank model around, but good enough for the time being.
Other captures and their original versions: 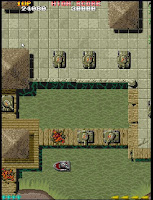 Creating these models has been very rewarding. Obviously there is a lot of work to do, but now I think I can finish at least the first level on my own, and that's very good news!
Posted by Javier Martin at 6:05 PM No comments:

Intro
For the last few years I've been developing Friking Shark, a 3D remake of the classic arcade Flying Shark on my free time. I really love the original game, and I want to make a tribute to their creators.
It's really hard to build a game from the ground up, and even harder if you try to develop at the same time a game, an engine, a generic widget system for the game editors, and a lot of other things that are interesting and fun but can be seen as overkilling to make an arcade remake.
It is hard, but it is worth the effort.  Each time I want to make a new GUI dialog and relying on the widget framework i got the job done in minutes, or when it takes 4 days to build a new editor from scratch I know I'm working on the right direction.
The game is under heavy development and I'm just a coder with no artistic skills. I need an artist (modelling and texturing) to complete the game in a reasonable time (I'm learning Blender just in case), if you are one and want to help please do not hesitate to contact me.
Technical info
FS was originally developed for Windows, but after working 2 years in Linux, I decided to make it multi-platform. It will be open sourced soon and I intend to make it GNU if possible.
Used technologies and libraries:
Important Features
Scenario Editor
The scenario editor is used to create the FS levels.
It relies on the Entity Types and Formation Types defined in the EntityEditor and FormationEditor.
A FS level is composed of:
As said before, the game engine is insanely modular and as a result the game engine is instantiated from the game editor itself so the game can be played while editing!. Actually, the editor is modifying the game objects directly, as they present an edition interface and serialize themselves in the scenario files.
Anytime you can switch from game view to free view to identify and track down bogus behaviours.
Formation Editor

The formation editor is used to create and edit  the formation types used throughout the levels.
It relies on the Entity Types created in the EntityEditor.
A Formation type is basically a group of entities (airplanes) that follow routes through the play area. Each entity in a formation can be instantiated once or more times, and can have an initial delay and a delay between instances.

The formation editor uses the game engine to create a sample scenario to test the formations. This simplifies debugging a lot.
Entity Editor

The entity editor is used to create and edit the entity types used throughout the levels.
When an entity type is created, its behaviour must be selected, a behaviour is a c++ class implemented in the configured modules (.dll/.so).
An entity is composed of:


The game is still being built, there are too many things in the TODO list to enumerate them here (I have  no intention to bore anyone).

Very special thanks to Raul Pasarín (A.K.A. Campa) for his invaluable help with the models in the past few years (he has made virtually every model in the game),without him is very likely this project had terminated prematurely.
Posted by Javier Martin at 3:45 AM 4 comments: